The natural park of the Coral Sea now has 28,000 square kilometres (10,810 square miles) of reserves. Three decrees adopted Tuesday, august 14 by the government of New Caledonia define very precisely the outlines. These texts, which were the subject of a public consultation from june 28 to july 12, mark a decisive step for the future of the Park.

Become a leader in marine environmental dynamics. This is the ambition affirmed by the president of the government of New Caledonia through three decrees adopted this tuesday. At the heart of these texts : the protection and enhancement of the natural park of the Coral sea. All the pristine coral reefs of the Park, the most valuable, are now protected, just four months after the start of the participatory reflection. " New Caledonia is becoming the hotspot for the preservation of marine biodiversity, including reef, " says President Philippe Germain.

The first decree established 28,000 square kilometres of reserves at Chesterfield, Bellona, Entrecasteaux, Petrie and Astrolabe. Of these, 7, 000 square kilometres have the status of an integral reserve (against 0,6 square kilometres until). It's the highest level of protection of the International Union for the Conservation of Nature (IUCN). By this classification, no access or human activity is allowed, except in the context of scientific research previously validated by government order.

The second decree sets the framework within professional tourism activities can be carried out in nature reserves. Access to these reserves is now prohibited for any vessel with a capacity of more than 200 passengers. " Tourism in our waters was not regulated. Until now, any cruise could be organized in the space of the Park without making the request, underlines the President. Since this morning, it's over. There will be rules to observe. And the first will be to obtain an authorization. "

Cruises called " expeditions " may, under very strict conditions (specifications, observers on board), acess to our reserves - not integral reserves - for a maximum of 200 passengers. " The conditions put in place must ensure that these expeditions do not affect the biodiversity and the space to discover, " insists the executive.

Finally, the third decree creates a dedicated action plan for the Entrecasteaux atolls, which reinforces the protection in force since their UNESCO World Heritage site inscription in 2008 and the creation of the protected area in 2013. 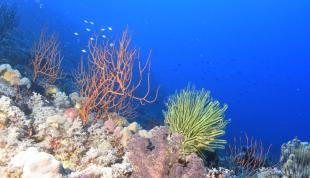 The natural park of the Coral sea is a marine protected area (MPA) spanning 1.3 million square kilometers (501,933 square miles), one of the largest protected area on the planet. There are more than 2,000 species of fish, 310 species of corals, more than a third of the world's virgin reefs (or pristine coral reefs) and more than 149 seamounts.

Park governance is ensured by a Management Committee, which develops and proposes the management plan, advises on its implementation, its evaluation, as well as on any other subject related to the sustainable management of the Park. Included the State, the Government of New Caledonia, customary authorities, environmental NGOs, and tourism and offshore professionals. A scientific committee, responsible for informing the Management Committee in its work, has also been set up.