REGULATIONS CURRENTLY APPLICABLE IN THE PARK

Since the Coral sea natural park was created in April 2014, measures have been taken concerning the entire maritime space covered by the natural park. Current regulations are as follows :

DEEP-SEA FISHING MONITORING IN THE PARK

Deep-sea fishing is closely monitored in New Caledonia by a network of scientific and institutional partners. After a few difficult years, the deep-sea fishing industry has taken measures to try to become profitable thanks to the joint involvement of the aforementioned network and professionals from the industry.

Because the market remains narrow, professionals have been trying to find new exportation markets while diversifying local supplies. Despite its fragile balance, deep-sea fishing can be considered as an example of a sector on the road to success.

Fishing licenses are granted by the Government of New Caledonia. It should be noted that they are restricted to local vessels, the longliners. Once a vessel holds a fishing license in the Coral sea natural park, it must respect certain regulations    :

Vessels authorized to fish in New Caledonia’s maritime space are subjected to satellite monitoring (VMS : Vessel Monitoring System).  This system put in place in early 2005 allows the real time monitoring of vessel movements when they are in the Natural Park of the Coral Sea.  Satellite complements other monitoring tools, notably fishing forms, by pointing out the gaps in statistics provided by ship-owners.

Every ship-owner whose vessel holds a license and is authorized to fish must, for each campaign, provide statistics regarding its activity. These information (information on the ship, fishing effort, catches) are detailed on fishing forms whose format has been determined by the administration in charge. As far as the form format used for tuna fishing is concerned, it is developed by the Secretariat of the Pacific Community (SPC) and the Forum Fisheries Agency (FFA), and it is used by member countries. Why use a set format for this form ? So that the information provided can be used to compile statistics for the Western and Central Pacific Fisheries Commission.

Fishing boat during a fishing campaign in the Coral Sea Natural Park, DAM/SPE

Before the creation of the Coral sea natural park, measures had already been put in place to protect a part of New Caledonia’s maritime zone, notably the d’Entrecasteaux atolls, located North of New Caledonia.

The measures concerning the d’Entrecasteaux protected area were put in place in July 2008, following its inclusion on UNESCO’s World Heritage List. Therefore, Fabre Island, Surprise Island and Huon Island are natural reserves. It is recommended to use the access trails to be able to discover these atolls without disturbing the local fauna. Leleizour Island and the vegetated part of Surprise Island have been declared wilderness areas, and are therefore closed to the public. Since august 2018, new regulations are decided and new marine wilderness areas have been created : the Pelotas atoll and Guilbert reefs.

Activities in the entire d'Entrecasteaux protected area are strictly regulated:

The following are now classified as wilderness areas in North Chesterfield: Longue Island and its southern cay, the Passage islet, the North-East islet and Mouillage Island No. 1, and the Bampton, Reynard and Avon islets.

All are considered by scientists as the richest and most frequented by green turtles and seabirds. The site is a coral sanctuary where sharks abound and humpback whales come to mate, give birth and nurse their young.

To Bellona, North-West Bellona, The Observatory, Olry and South Bellona are classified as wilderness areas.

The rest of Chesterfield-Bellona now are classified in nature reserves. 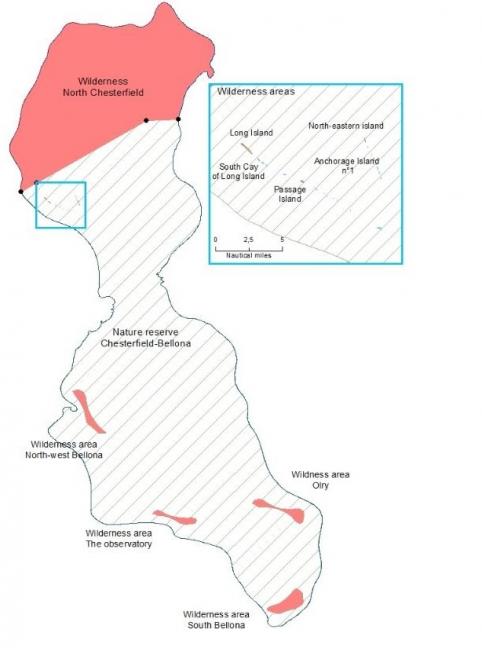 REGULATION APPLICABLE AT PETRIE AND ASTROLABE

The whole of Petrie and Astrolabe is classified as a wilderness area. Since 2014, the excellent condition of these reefs and lagoons, located several hours by sea from Ouvéa, is illustrated by the presence of many species of fish. Petrie holds the world record in terms of biomass density.